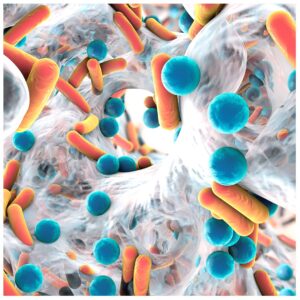 You may not have heard the term “biofilm,” but you’ve been familiar with it your entire life.

Before we discuss why battling biofilm is important, a general understanding of what it is will help emphasize the urgency in managing it –especially when it comes to healing chronic wounds.

An everyday example of biofilm that you are likely familiar with is the film that forms on your teeth and gums in between brushing. This film is an abundance of bacteria that can lead to everything from halitosis to more severe gum disease and tooth decay. Another example familiar to pet owners is the slimy film that forms in a dog or cat’s water bowl, sometimes accompanied by a distinct color, such as pink or green. The film in your mouth and in your pet’s bowl is biofilm.

How is biofilm different than other bacteria? Individual bacteria tend to multiply and form colonies. Bacteria is everywhere and much of it does not pose an immediate danger to other living organisms. In fact, some bacteria, such as that which is found in our intestinal tract, is essential to our well-being.

Imagine an open wound on your skin. Under normal circumstances, your body responds to a cut, blister, scrape, or other injury, by healing uneventfully. Sometimes bacteria can get into a wound and cause inflammation or an infection that may temporarily delay healing but will respond to antiseptics or antibiotics. The type of bacteria that is found along the surface of a wound that responds to cleaning or antibiotics is known as planktonic bacteria.

It is when bacterial colonies develop a protective outer layer that is resistant to antibiotics, that the potential for danger occurs. This protective outer layer is known as the “glycocalyx” and can be the reason why prosthetic hips and knees become infected and require subsequent removal, or why chronic wounds are often slow to heal. This type of antibiotic-resistant colony is biofilm in its most potentially dangerous form. Complicating matters more is that biofilm not only colonizes along the surface of a wound but is also found below the surface and in the surrounding callus or skin.

When biofilm has successfully colonized in compromised skin, it creates an inflammatory state that disrupts the healing and reparative processes, resulting in a non-healing or chronic wound. Because biofilm colonies are resistant to antibiotics, the only way to eradicate them is to physically disrupt and remove it through surgical removal known as debridement.

Remembering that biofilm colonies are often found below the surface of a wound or in surrounding skin, surgical debridement of a wound’s surface does not often result in complete removal. Additionally, biofilms have demonstrated the ability to recolonize within 24 hours after a surgical debridement, posing further challenges to the healing of a chronic wound!

Omeza® Lidocaine Lavage and Omeza® Collagen Matrix have been developed, in part, to address the issue of biofilm in the treatment of chronic wounds. Naturally occurring omega fatty acids are key ingredients of the Omeza® products and have demonstrated the ability to disrupt biofilm colonization, reduce local inflammation, and enhance the healing process in previously slow to heal wounds.

Battling biofilm is a critical aspect of treating and healing chronic wounds. The benefits of omega fatty acids go beyond biofilm disruption. The science on which Omeza® products have been created will continue to help many who are suffering while offering hope for others who will be faced with chronic wounds in the future.